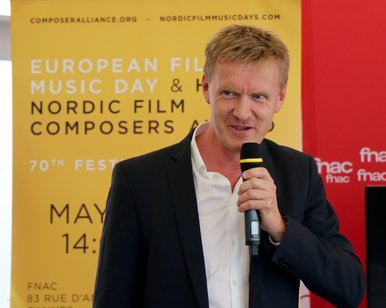 HALFDAN E WRITES: We’re at FNAC, Rue d’Antibe, Cannes: it’s Monday and we’re preparing EFMD. Chairs are being set up , pull-up posters placed on the small stage in one end of the terrace, there’s a relaxed atmosphere here, we’re not expecting a rush of people, we’re confident that no matter how many show up, we’ll have a great exchange of ideas and knowledge.

In a seemless, easy flowing sort-of way, Thor Joachim and the participants for the first part of the seminar show up, get placed on the stage and we’re up and running. There’s an audience of about 30 people, less than we hoped but we don’t really care since this is the b2b part and to be expected. The show is relaxed but to-the-point, serious but not too. Thor Joachim does a great job of moderating the discussions, keen but not getting in the way of the discussion.

First panel is about the all-important communication between composer and director: a vital subject when you’re dealing with something that is in essence ‘hot air’: how do you bridge the gap between two people with a different inner vision of ‘sorrow’ or ‘happy, but otherwise not too involved’ or any other sentiment that needs to be underlined musically ?

Second Panel deals with ‘game music’, more specifically the white paper that NFCN is preparing, set up against the knowledge gained by Patrick Ager and Alfons Karabuda, fresh from LA and round table meetings with game composers. What’s real, how’s the situation, what needs to be done !?

Third and last panel is a Q&A with Olivier Deriviére, a French game composer with some of the most popular games to his credit: How does he see the future, what’s his experience with the industry and the road that lays ahead of it?

All three panels deal with the serious inner workings of our trade, something you’d be hard pushed to know anything about unless you’re actually working with these nuts and bolts. I understand why so relatively few heads have shown up for this seminar, while at the same time I’m immensely proud that we’re maintaining such a high level and quality, since this really is our claim to fame: that we’re serious. That we’re ambitious and want to go somewhere.

Up next is Harpa, or rather, the Nordic Film Composer Award. I’m having the pleasure of hosting this, and I’m nervous but excited. We need to keep it short, effective and strong – but relaxed. As always, I’m sort-of improvising and this is not always working.
After a brief introduction to NFCN and our mission (‘to be part of Cannes, part of Europe, part of the play’) we continue to the Lifetime Achievement Award and the awardee, presented to the audience (now full house, approx.. 80 pax) via the 2.5 min video we made for Nordic film Music Days in Berlin. After that, Ingrid Kindem comes on stage, reads the motivation and gives the award to BFB, who, no matter how much he hates sentimentalism, looks touched by this award, given to him by his colleagues of all five Nordic countries. He then reads a short speech, and receives a standing ovation by the audience.
After this, we move on to the annual Best Score award, first presenting the five nominees with their videos made for Berlin. This is brilliant: not only do we get to hear their music, we get to know all five of them, their personalities and the way they perceive music and their way of inventing and preparing a film score. Much like architects., they perceive music as a three-dimensional room, a place they need to build around the directors’ vision.

The grand jury then comes on stage, defend their choice and have Sune Martin on stage to receive the award. As Bernard Grimaldi and Christine Aufderhaar put it, all five candidates are brilliant, but only one can win. Sune receives the award thanks the jury and that’ that; the show is wrapped up.

I’ve been to Cannes a few times and when I’m on my way home, II keep asking myself what I gain from it : did I learn anything ? meet anybody that will broaden my horizon ?
is it just one giant, mad Christmas lunch high on rosé wine – or did anything substantial happen ?

During the 7 years we’ve given this award, we’ve never had any media coverage worth talking about: like Alfons says, things take time, the Polar Prize is running on its 28th year but took at least 10 years to unfold. In DK alone, out of a population of 5 mio people, only 100 qualify as ‘media composers’ so how can we expect the media to show us any interest ? we’re simply not sexy, baby.

After 5 years of moving our award around between our Nordic countries, we then moved it to Berlin and started up a new chapter of the story, placing the actual show at the Nordic embassies. This proved to be a step up the ladder: being a part of the ‘official’ Nordic Cultural policy, we now gained the approval of the large Nordic funds. Still, the media stayed away, but we now had the attention of the Film Institutes and the pro players in the Nordic film industry.

Cannes has all the way through been a goal: the place is too slippery for anybody to gain an actual foothold, the farthest you get is based on your budget really – but to get here, show what we’re capable of, get the attention of the entire European film business, while at the same time getting air time and being visible in our home countries: that has always been a target.
Ironically, the same funds that back us in Berlin didn’t see it that way, but I hope this will prove them wrong: during our EFMD and the Harpa award ceremony, we’ve had the pleasure of having Associated press and Ritzau covering the show, while Scanpix, Danish Radio and Danish Tv-2 transmitted live from the show. This coverage is worth more than anything we’ve done so far, as it promotes the cause, exposes us to a large film audience, lends us a seriousness and – we hope – promotes our composers and the culture of our territories.

We can do it without Cannes – just as you can light a fire with two rocks. Or to put it differently, being present at Cannes will forward our thing, baby – as long as we’re serious, focused and conscious about how we do things. We will stay in Berlin, this place now forming our backbone – but we need Cannes to expose it. This is no newfound knowledge, the Film Institues, companies, producers, fundraisers and reviewers have known it for years. They’re present in Cannes to wrap up a year’s hard and focused work at home, meet their backers and followers and gain presence.

I really believe we need to be there too.

Thoughts from a film music critic 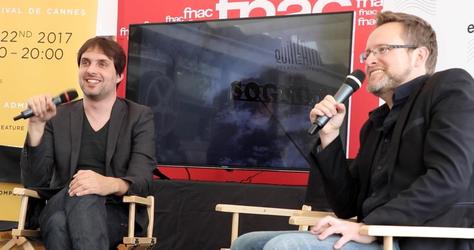 ...Just as hordes of film music fans and IFMCA members

gathered in Krakow for the Krakow Film Music Festival, the

European Film Music Day was hosted on the terrace of the

record store FNAC in Cannes, smack in the middle of the

Cannes Film Festival. As usual, the event was a mix of

seminars and networking for fans and industry